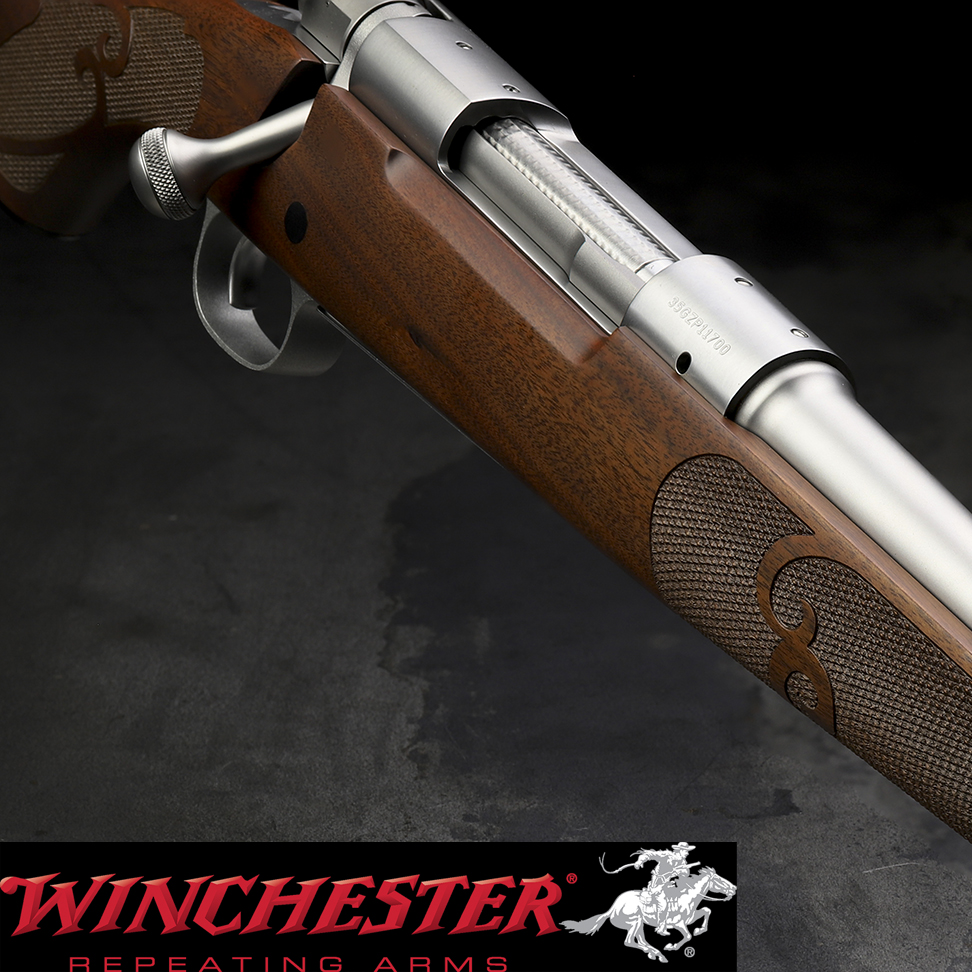 Today's Model 70 has the addition of the M.O.A.™ Trigger System, improved fit and finish and enhanced accuracy to go along with its classic Pre‐'64 controlled round feeding. It is all there: Three‐Position Safety and solid, sure handling. The M.O.A. Trigger helps the model 70 deliver the extreme accuracy benchmark 1" group at 100 yards.

The Model 70's new M.O.A. Trigger System is the most precise three‐lever trigger system in the world. Operating on a simple pivoting lever principle, the trigger mechanism has been completely redesigned to exhibit zero take up, zero creep and zero overtravel. The pull weight ranges from 3 to 5 pounds and is factory‐set at 3 3/4 pounds. Because of the enhanced ergonomics, wide smooth triggerpiece and 2:1 mechanical advantage created by the unique design geometry, it actually feels like half that weight.

Zero Take Up. Take up is the distance the triggerpiece travels prior to the sear moving toward release and the shooter feeling resistance. The new Model 70 M.O.A. Trigger System has no take up because the take up spring keeps the triggerpiece in constant contact with the actuator.

Zero Creep. Creep is the perceptible movement of the trigger prior to the release of the firing pin or striker. Creep has a negative influence on accuracy because it adds inconsistency and uncertainty during the trigger pull. This contributes to jerking the trigger and thus adds to the movement of the firearm during firing. The 2:1 mechanical advantage created by the trigger design's unique geometry is how creep has been virtually eliminated in the new Model 70 M.O.A. Trigger.

Zero OverTravel. Overtravel is the rearward movement of the trigger after the firing pin or striker has been released. It can actually jar the gun away from its intended point of aim and is also very distracting to the shooter. That's why the new Model 70 M.O.A. Trigger System is set at the factory to have no perceptible overtravel. Where you aim is where you shoot.

If there were a single feature responsible for the Model 70 being known as the "Bolt‐Action Rifle of the Century," it would be the classic Controlled Round Feed (CRF) bolt design. This is a massive claw extractor that smoothly slips onto and secures about one‐quarter of the base of the cartridge. This exerts full control over the cartridge from the time it leaves the magazine, as it enters the chamber, gripping tightly until the cartridge is fully ejected. This design also allows an unfired cartridge to be extracted even if it is not yet fully chambered. It's another feature found on the Model 70.

The legendary handling and quickness of the Model 70 Featherweight. Few rifles can be identified in an instant like the Featherweight. It is justly famous among hunters everywhere.

The Model 70 action offers Pre‐'64 style Controlled Round Feeding, a Three‐Position Safety and is highlighted by a jeweled bolt body with knurled bolt handle.

Inside is the M.O.A. Trigger System, the finest trigger ever offered in a bolt‐action with zero take up, zero creep and zero overtravel.

Like the original Featherweight, the angled comb Grade I walnut stock still features the Schnabel fore‐end and satin finish with elegant cut checkering. A premium Pachmayr® Decelerator® pad helps soak up felt recoil. It's available in the most popular long and short action calibers, including WSM chamberings.

Be part of the ongoing generation of Featherweight owners. Generations of serious hunters have made the Model 70 Featherweight the iconic all-around rifle for any hunt. Easy‐to‐carry, accurate and utterly reliable, the Featherweight is ideal for deer, varmints, hogs and antelope.

We have several chamberings of the Model 70 Featherweight in stock and available now. Both compact and full-sized, blued and stainless. MSRP on the rifle shown above is $1,209.99.

Find all of the Model 70 Featherweights at this link.