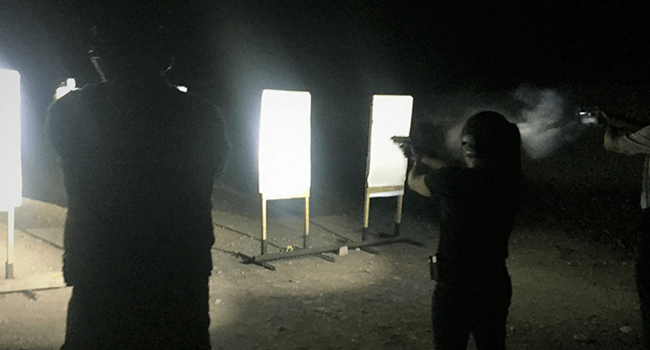 Add Lights To Your Defensive Handgun

Many people purchase a firearm and ammunition, and perhaps a holster if they’re going to carry the gun in their daily travels, and feel they’re protected. But consider the time when most violent crime happens—after dark. After dark, there’s no certain way to fire with safety and effectiveness unless there is some source of light. Enter the all-important auxiliary light source.

Lights for self-protection can include a handheld flashlight, a firearm-mounted light or both. Light functions can include target identification, navigation through immediate surroundings, searching an area, signaling to others, and disorienting a would-be attacker. As a last resort, a handheld light can be a striking tool. This article covers basic information on light selection.

A firearm-mounted light attaches to the underside of the frame, beneath the barrel, on most handguns, or to the side or bottom of the fore-end of a long gun. There was a time when a rail attachment was a must for attaching a light to a handgun, which excluded many 1911s as well as a large number of subcompacts. Today, lack of an underside rail is no longer a barrier to having a light or a laser-aiming device. Several vendors now make combination products that allow for the use of light, laser or both and don’t require a rail, and these accessories have the advantage of being slimmer and easier to fit in a holster than a full-size light accessory, which often requires a custom holster.

One underrated advantage of a firearm-mounted light is the simplicity of picking up one object and having two tools—light and gun—at the ready. There is less need for organization or “fishing” for a flashlight. The major advantage of such lights is that they lend the near-certain ability to continuously identify the target since the light and muzzle point as one unit.

That simultaneous muzzle/light pointing issue is also the biggest drawback of this arrangement. To navigate, signal and sometimes search an area with a “loaded flashlight” rather flies in the face of firearm safety principles. If you decide that a firearm-mounted light is right for your personal- or home-defense situation, you must find training in the use of such lights, practice regularly with that accessory engaged and, above all, keep your finger off the trigger if you are not engaging a target.

You should also choose a light that has a switch you can comfortably reach and operate. There is a plethora of designs on the market. Some are operated with a thumb, some by the forefingers of the support hand, others by squeezing the grip with the firing hand. This is one area in which it’s invaluable to get help from friends, an instructor and your local gun shop and firing range. The best way to know if a particular firearm-mounted light setup is agreeable for you is to try it, hands-on.

Even with a firearm-mounted light, a handheld light should be part of your self-defense “kit.” Choosing a light that’s capable of definitively identifying a deadly force threat—a black gun against a dark-colored shirt worn by an uninvited guest—is not as simple as going to the hardware store and buying the cheapest flashlight on the shelf. It’s also not as simple as buying one that’s identified in its labeling as “tactical.” Let’s look at a few factors that comprise a handheld torch well-suited to a role in self-defense.

Most interior walls in our culture are light in color and often feature expanses of glass in the form of windows or mirrors. If this is descriptive of the area you dwell in, opt for a moderately bright light of 75 to 200 lumens. Brighter light can actually be blinding to the operator, and lights that don’t have a lumen rating are often too dim to identify a threat.

If your area of defense is expansive or mostly dark in color—a shop yard, warehouse, or pasture, for example—consider a brighter lumen rating of 300 or more. (Note: We do not—I repeat, do not—advocate the pursuit of human subjects, especially outside the walls of a personal dwelling or workplace. However, there are reasons to light up outdoor spaces, particularly for rural dwellers where defense from predatory game animals is warranted.)

Time spent fiddling around trying to find a side-mounted flashlight switch can spell frustration at least—and danger at worst. With a switch located on the rear of the light, operation is intuitive.

This option adds a few dollars but yields massive benefit. The ability to turn the light on or off with just a bit of pressure means that, if the light is dropped, it won’t light up the operator. In a defensive encounter, darkness can be the friend that protects you! The rule with all lights, handheld or otherwise, is to use the light as much as necessary, but as little as possible—if you’re using a light, others can see that light too. One thing to keep in mind with pressure switches is that they can inadvertently be turned on in a crowded storage area, which will run the batteries down. Store carefully and check often for reliability.

Lights with features like different colors for map-reading or tracking and those with numerous brightness settings tend to be distracting even under a little pressure to perform. In a self-defense situation, that distraction can quickly become a problem. My advice is to pick a simple That said, a strobe feature can be beneficial in delaying an attack as an attacker is often initially startled by a strobe activated in a timely manner—and you might be too. Again, find instruction and then practice so that you’re mentally prepared.

We live in a wonderful time in which an entire tactical flashlight can be contained inside a tightly cupped hand—or can be rolling-pin sized. Practice using a light choice and firearm in unison, including performing reloads and malfunction clearances. This can help you discover the optimum length and thickness of the light that’s right for you. Keep in mind that malfunctions in semi-auto pistols are relatively common among those don’t practice regularly with a handheld light, as they tend to compromise on the wrist-stiffening that supports the cycling of ammunition.

A great handheld light for indoor use can be found for less than $40, though prices for these and firearm-mounted lights can climb well into the $100s. You will need to explore options for battery power—usually CR123A, AA or AAA—and decide if you prefer the higher power but shorter life of the CR123A or the slightly reduced-power common batteries that tend to be a little more forgiving about slow replacement. Rechargeable batteries are not recommended for self-defense lights. Their longevity and need for maintenance often exceeds the owner’s commitment.

Buying a Light is Not the Last Step

Keep your self-defense lights where they’re both accessible and easy to test often. This includes your firearm-mounted lights—but you should never muzzle your own hand or any other body part as part of testing a firearm-mounted light or laser! That testing should be done with all ammunition and magazines removed and against a safe backstop.

Whatever lights you choose need your help you stay in good working order. It takes only a second to affirm a light is working and ready to help—and that’s part and parcel of the overall responsibility of owning a gun for self-defense.